“A rich, complex Zinfandel showing the rustic mouthfeel sometimes found in Dry Creek reds. The tannins are strong and jagged, and the berry and cherry flavors have a wild, briary taste. But the finish is bone dry, and the wine grows more interesting as it breathes in the glass.”
~ S.H. (3/1/2011)

“Ray Teldeschi grows this on 100-year-old zinfandel vines, which manage their ripe fruit with an intriguing balance. It’s figgy and rich, hidden behind new oak until it’s had time to take on air. Hints of leather, peach and grapefruit add detail to the fatness of the fruit, suggesting the complexity that will develop as the wine ages.”

Originally posted on June 6, 2014 by Jeff Kralik on his blog, The Drunken Cyclist

A few weeks ago, I was out in the Dry Creek Valley for a couple of days. I stayed at Grape House, the wonderful Bed and Breakfast at Goodkin Vineyards on Dry Creek Road. On my first evening there, Donald Goodkin organized a tasting with a few of the growers/vintners in the Valley.

After we the introductions, it was time to get down to some tasting. The assembled crew had decided the best order to taste the wines that they had brought over with them. We first tasted through Erik Miller’s Kokomo Winery bottles, and then two wines from Gerry Pasterick and the Vineyard of Pasterick.

Following Gerry Pasterick, Ray Teldeschi of Teldeschi Vineyards and Del Carlo Winery brought two of his wines for us to sample. Before we got to the wine, Ray talked a bit about his winery, his vineyard, and his approach to wine growing. Up until that point, there had been a lot of banter, a bit of joking around, and some clever repartee. Once Ray began to speak, however, it got very quiet. It is conceivable that the diminished volume was due to the fact that Ray speaks rather softly—I doubt he is the type to talk over another in any circumstance. I believe, however, that the relative calm was born out of respect for a man who has spent his entire life in the valley, being a fourth generation wine grower.

Don’t get me wrong, it is clear that Ray likes a good laugh, as he would laugh along with his colleagues when one of the more jocular participants would produce a witty quip. But Ray seemed to be more inclined to sit back and observe his friends and neighbors than to partake in the banter, which was underscored when he talked about his approach to farming.

Ray Teldeschi not only owns and manages Teldeschi Vineyard, whose fruit is very much in demand, but he is also the vineyard manager for countless other vineyards all over the valley. I doubt there is a resident of Dry Creek that doesn’t know and admire Ray and the work that he does. At one point, I asked Ray if managing so many vineyards was challenging, he paused, but only for a moment, and responded: “There is no real magic to wine growing. The vineyard is just one big garden.”

I imagine that Ray approaches his work with that in mind on a daily basis. He does not take me as the type of man who is easily flustered. In fact, I would be surprised if he gets flustered at all. I have no doubt that part of his calm demeanor comes from experience—with his four decades plus of growing grapes in the Valley, he has no doubt witnessed the panoply of potential problems in the vineyard and is able to put it all into perspective. But beyond experience, there is a serenity to Ray that is hard to describe—even if he remains mostly reticent, you want to be near him, for when he speaks, you know it will be of value.

Ray’s father Michele (Mike) and mother, Lucille Del Carlo met in 1938 in Dry Creek Valley and were married three years later. Shortly after Mike returned from the war, they purchased a vineyard along Dry Creek Road, which they would come to call “the Home Ranch.”

Ray, his wife Lori, father Mike (who passed away in 2009) and son Marc. From delcalrowinery.com

After farming the Home Ranch for four decades, Ray, along with his wife Lori and their son Marc, opened Del Carlo Winery. While they still sell close to 90% of the fruit from the vineyard, they keep some of the best fruit for their own label. In my previous article about the Vineyard of Pasterick, I attempted to delineate the parameters of “smallness” when it comes to the size of a winery. Generally speaking, anything under 8,000 cases produced is generally considered a “small” winery.

That small size means that a lot more attention can be paid to the wine throughout the process, which certainly shows up in the bottle.

The first wine he poured was his 2011 Del Carlo Old Vine Zinfandel (Retail $32).90% Old Vine Zinfandel, 10% Old Clone Petite Sirah. 290 cases produced. All of the fruit comes from the Home Ranch, with much of it from vines that are over a century old. Ray added that at the time the vineyard was purchased, his father wanted to pull out all the Zin vines, but he simply could not afford it—resulting in many happy Zin drinkers in the seven decades since. The wine is aged for 10 months in American (Pennsylvanian) oak barrells (20% new), and comes in at 15% alcohol, which is certainly on the high-end.

Until you taste it.

Blackberry and plum abound with a hint of pepper and some noticeable tannin. There is a lot going on here, but the wine is seamlessly balanced—the alcohol is held in check by all that fruit and structure. I have said before that I love old Zins, and this is one that would no doubt be doing well 10+ years from now. Outstanding. 90-92 Points.

He later poured the 2009 Del Carlo Cabernet Sauvignon (Retail $30). Ray used French oak for this Cab, 20% new, and aged it for 18 months. All of the fruit comes from the Home Ranch and is 100% Cabernet Sauvignon. Black currant and a bit of pepper come out of the glass with a bit of a swirl, and some black cherry and mocha are introduced on the palate. The acidity and tannins are wonderfully in balance, leading to a lingering finish. $30 for a Cab this good? That is practically stealing. Outstanding. 91-93 Points. 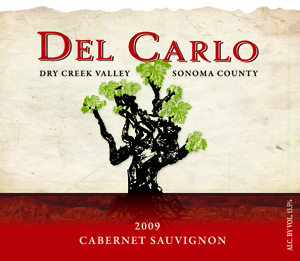 ​2009 Del Carlo Cabernet Sauvignon Black currant and a bit of pepper come out of the glass with a bit of a swirl, and some black cherry and mocha are introduced on the palate. The acidity and tannins are wonderfully in balance, leading to a lingering finish. $30 for a Cab this good? That is practically stealing.

2011 Del Carlo Old Vine Zinfandel Blackberry and plum abound with a hint of pepper and some noticeable tannin. There is a lot going on here, but the wine is seamlessly balanced—the alcohol is held in check by all that fruit and structure. I have said before that I love old Zins, and this is one that would no doubt be doing well 10+ years from now. 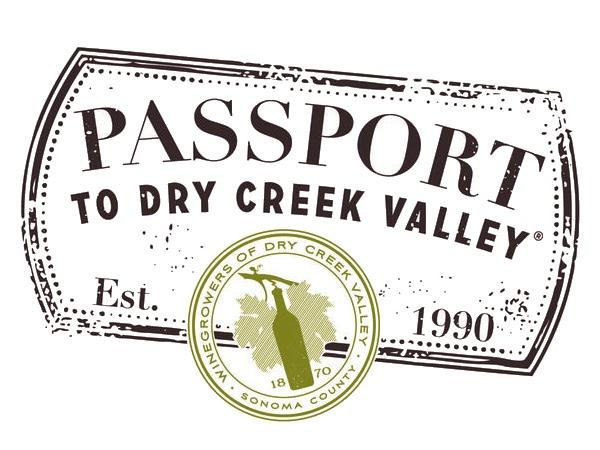 This coveted multi-winery event is sponsored by the Winegrowers of Dry Creek Valley. Tickets went on sale in February and they have been known to sell out. For additional information, please visit drycreekvalley.org

The next stop for the 12 Days of Zin, takes me back to Dry Creek Valley. At three years old the Del Carlo Winery is a fairly new operation. However the two families involved in it (Del Carlo & Teldeschi) have deep roots in Sonoma County. Different branches of the family have been winemakers, growers, farmers and/or residents of the Dry Creek Valley dating as far back as 1929. And in fact some of the Zinfandel vines they still farm and get fruit from are over 100 years old. They’re not joking when they say “Old Vine.”

“…Dry Creek Valley has won the “most synonymous with Zinfandel” popularity contest, for now. Many family names, often Italian, are in turn synonymous with old vine, Dry Creek Zinfandel. So who is this new Del Carlo, doing business only since 2005? Just another family name of four-generation Dry Creek growers, the Teldeschis. Say no more!”

Summer is here, and that means it’s time to take the cover off the barbecue, clean out the cobwebs and get it ready for the great American tradition of backyard grilling. And no wine is more American than zinfandel, the quintessential BBQ wine. It goes with anything that fits on the grill — ribs, steaks, even chicken. Zinfandel is the perfect match.

92 Points for ’06 Zin in Wine Enthusiast